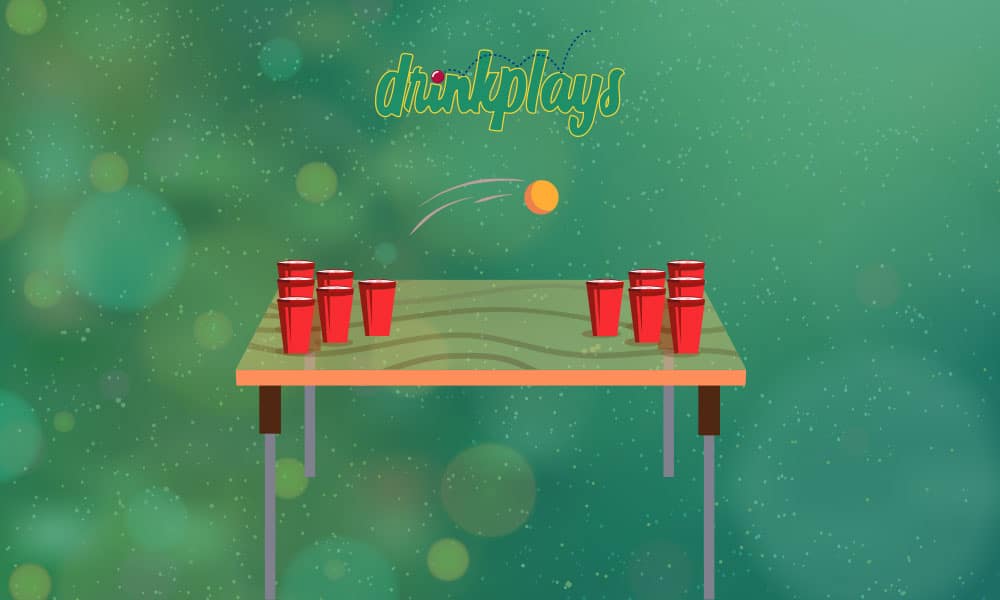 Possibly the most popular drinking game in the world, and for good reason. Show off your shooting and drinking skills while playing solos or teams to become the beer pong champion...

How to Play Beer Pong – Setting it Up

Place 6 plastic cups on each end of the table in a pyramid shape as seen in the above image with the base towards you and the tip facing the enemy player/team, you can use more cups if you want to increase the drinking factor. Fill your cups with your alcohol (normally beer) up to the line inside the cup, or about 30-35%.

If you are playing in teams of two then each player gets 3 cups out of the 6 so when your 3 cups get sunk you drink and if your partner's cups get sunk then they drink. You can decide on how to do the split, the easiest way is one person gets the diagonal line and the other player gets the mini pyramid left. Alternatively, you can both drink for each cup that gets sunk - whatever floats your boat.

Fill the bucket with water if you have it, this bucket will be used to clean the balls before players shoot – this step is optional.

The team to shoot first is decided by a successful shot. You must shoot at the same time as the opposite team’s player while maintaining eye contact with them, and the one to sink it gets first shot (no points are gained for this shot). If both players sink a ball then you continue to shoot until one misses or a tie is broken.

Your job is to sink all of the opposing team’s cups before they sink yours. Shots are taken by both players on one team before the opposing team gets a chance to shoot and the sunken cups must be picked up and drank right away. There are a few rules when playing:

Players should alternate who drinks what cup. For example, you drink the first cup that is sunk and your partner drinks the second then you drink the third and your partner drinks the fourth. If a player misses the table when shooting they lose their next turn, however if nobody calls them out before they shoot in their next turn than it counts as a real shot.

When you get down to four cups rearrange them into a diamond as such: